Swap Zap will probably take the same path as Panda Craze, a Mini that offers a great gaming experience but still remains underappreciated because of its lack of…um…fancy things. “Graphics don’t matter”; a great gaming adage, but who are we fooling? The majority of the gaming population disagrees. If you go about praising a game with average graphics, they’ll call you an elitist or a nostalgic gamer stuck in decades past. Or both. Swap Zap is an action puzzler that doesn’t have bells and whistles, frills and confetti. Instead, this Mini has the number one must-have characteristic for a puzzler: outstanding level design. Swap Zap came out of nowhere, and for the lack of a better term, like a ZAP! Swap Zap features a heroine, Pam, who is trapped in a cargo container of a space shuttle. She must descend through six sections with ten levels each. Each level features a lot, definitely a lot, of obstacles and creatures. Indeed, a huge roster of characters and items. In order to complete a level, you must collect all the power cores so the airlock opens for the next level. These power cores are situated above the level most of the time, and you have to stack things such as boxes, radioactive barrels, cannons and whatnot in order to reach them. And, you are only armed with a swapping gun. Shooting an item switches your place with it, and that by itself is a puzzler already. The other good thing about this game is that you can switch to aiming mode by pressing either shoulder button at any time. However, some (specifically the target demographic of this game) may have a hard time accepting that this game’s movement is analog nub only. You are unable to move while aiming because you are to use the nub for controlling the crosshair. The mighty D-pad is completely disabled except in the menus. Triangle or Square fires the gun, and jumping is allocated to Circle and X; just choose which you are comfortable with. The beginning levels are easy-breezy. But, as soon as you progress beyond those, the joy and the difficulty begin. Each level can be completed within seconds—if you can complete it. The difficulty is not off-putting but requires ingenious puzzle-solving. The game has lives because there are damaging elements in each level. But, the life meter reverts back to full every time you proceed to the next level. This makes this Mini easy to stop and then resume; the gameplay is a per-level affair. 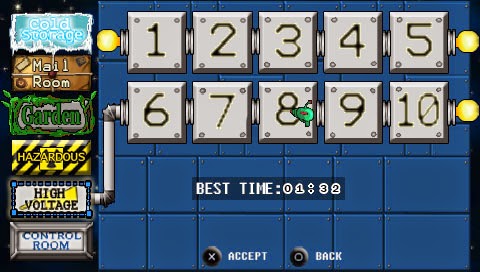 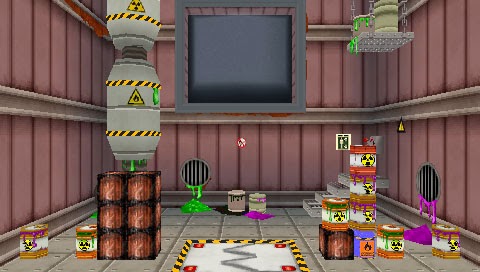 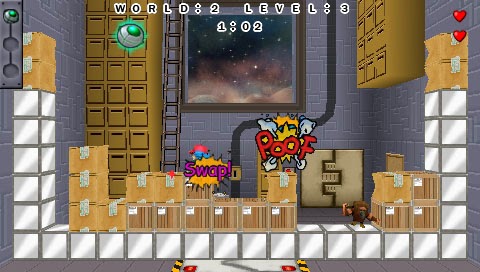