Enchanted Cavern, a puzzle game published by Alawar and developed by Wellore, was something of a surprise. The ESRB had rated it a long time ago, then nothing, so I had gathered it must have been canceled for some reason. But it suddenly popped up in Europe, a nice surprise because for one, it’s not a Farm Frenzy game, and for another, it means that other long-delayed Minis might show up. At first glance, Enchanted Cavern looks like a normal match-3 game, having a playing field of a number of color jewels arranged in a grid pattern. But it doesn’t use traditional match-3 mechanics, like in Bejeweled where you click on a jewel and then on a neighboring one to swap places in order to make matches of 3 in a row, causing them to disappear and be replaced by new jewels. Instead, the goal is to simply find and pick existing match-3s. That is, where 3 jewels (or more) of the same color are next to each other, either vertically or horizontally (or both). So, it’s actually more like the old game, Sega Swirl, which was included on the Dreamcast browser disc. It’s not quite, because there the goal was to remove all the jewels from the playing field (and you could remove even single jewels). Here sometimes that is the case—you must remove all the jewels on the grid—but more often it has the goals found in the traditional match-3. For instance, the basic sort of way of finishing a level is making a match on every single cell of the grid, causing the background color of the cell to change. In this case, the jewels you match are replaced. There are also levels where you need to move certain things down the grid, by destroying the jewels underneath them. Or simply destroy certain cells on the map. Again, in these cases, more jewels fall in as you destroy them. But then there are puzzle levels, where you are given a board layout and your goal is to destroy them all (much like in Sega Swirl). Here the jewels aren’t replaced, obviously. The variety is nice, but sometimes it’s not obvious just what you have to do to win a level. I was confused on more than one occasion. After you do finish each level, you are given a score and a rating: Novice, Master, or Expert. If you are a match-3 fan like I am, you probably won’t see anything new. But, there is a nice variety from level to level, and you never know what you have to do next, so it keeps the gameplay fresh, rather than repetitive. The other nice thing is that unlike Alawar’s past Minis, the cinematics between levels have not been removed. Granted, they aren’t really much, but in between levels you do see something happen, so it feels like you are accomplishing something. At first the difficulty is easy, almost relaxing, but once you get into the second world, the levels become a lot harder. Match-3 games do require some skill, especially the ones like this with goals of having to move certain pieces down the board. But luck is also a factor, and it seems like the design of certain levels requires more luck than skill. One level in particular is really, really hard. Graphically it’s a very nice-looking game. The jewels are brightly colored and shaped differently, so I think those with trouble differentiating colors could still play it. As mentioned earlier, the cutscenes from the original PC version are intact, which is a first for an Alawar Mini. They aren’t overwhelming, instead pretty low key, but well done. The music is nice and relaxing, which can be somewhat at odds with the gameplay. While I’m glad they kept the cutscenes in, it is perhaps because of it that loading in the game can be somewhat sluggish. Sound effects also have a tendency to simply cut off. Nothing major, but it’s noticeable. Enchanted Cavern probably won’t wow anyone, but it’s a solid match-3-style game that’s a little different, but not too much. If you play match-3 games to relax, this is probably too challenging. It’s actually funny how difficult so-called “casual” games can be, and having a level skip function or an untimed mode would have gone a long way to making the game better. 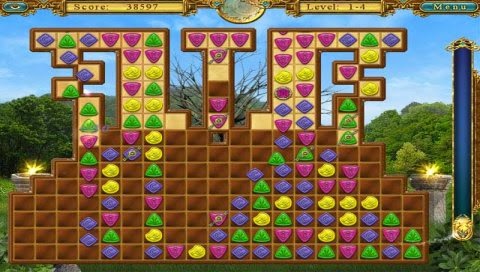 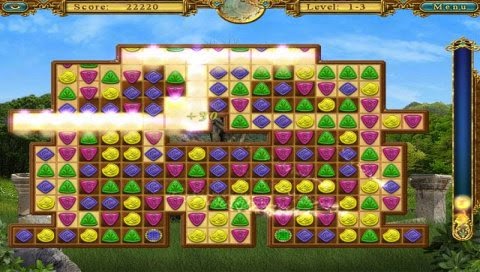 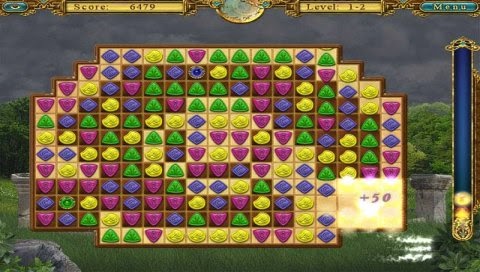